I have submitted Sugar Rush 1.0.4 and Sugar Rush Free 1.0.4. This update fixes a bug where the balloon sometimes didn’t appear when floating and adds 3 new achievements for conserving jump power and for collecting all 4 bonus powers in a single game.

Removr 1.3.3 approved after being rejected

My recent Removr updates were rejected with the note:

“Please remove any references of iOS 5 from your release notes and/or application description.”

Thankfully, Apple no longer requires reuploading a binary when it’s rejected for metadata issues. Supposedly just changing the description (it now says ‘bug fixes’ rather than ‘now compatible with iOS 5’) and replying to the message in resolution center should be enough to have it reviewed again.

On a side note, I’ve heard that iOS 5 beta 2 resolves the issue with SQLite3 opening databases in the app bundle, although I haven’t verified it yet.

Update: Apple has approved the updates after simply changing the description without resubmitting the binary. Removr 1.3.3 & Removr Free 1.3.3 are now available.

For some reason I don’t understand, iDjembe, which is my least interesting and lowest-rated app, is outselling my other apps, including Sugar Rush. This is not good because the low ratings brings down my average app store ratings, despite Removr & Sugar Rush’s much higher ratings.

Last week I tried to kill iDjembe by quietly raising the price to $1.40. That did stop iDjembe sales, but at the same time it brought down the sales of my other apps. Rather than kill it, I tried the opposite by making it free. That experiment seemed to work, and I’m now getting 700-800 free downloads a day, so I decided to keep it free and use it to help sell my other apps.

To go along with the pricing change, I submitted a minor update to iDjembe, version 2.1.2, which updates the info screen with the description & app store link for Sugar Rush, and makes the info button a little more prominent with a cute sugar rush player icon.

Removr 1.3.3 has been submitted

I’ve been able to test my apps in iOS 5 and the only one that has an issue is Removr. Sugar Rush is 100% compatible with iOS 5 and doesn’t require an update.

Removr immediately returns to the menu when you tap play or try to go to a level. I’ve already fixed it and will submit the update after some further testing as soon as Apple accepts iOS 5 application updates.

There seems to be a change in SQLite’s behavior under iOS 5 which affected Removr. I’m storing the level maps as a SQLite database in the application bundle. In the current version, I’m opening the database as follows:

Under iOS 5, that fails unless readonly mode is specified when opening the database. The simple fix was merely to specify read only mode as follows:

I will release a Removr beta in the next few days to anyone whose device ID I have (I can’t add any new devices until July 16).

I haven’t had a chance to write any blog posts last week while I was at WWDC, but I had a great time and learned a lot. This may have been the most important WWDC in recent years.

While last year’s WWDC focused primarily on iOS, this year’s conference was about equally split between iOS 5 and Mac OS X Lion. Both systems share some major enhancements including iCloud storage and Objective C runtime improvements that make memory management easier and a lot faster. I can’t write about much of what I saw, since everything except the keynote is under NDA. I will say that I’m running iOS 5 on my iPad and Lion on my MacBook Air and I’m very happy with both and find them stable enough for regular use. I haven’t installed iOS 5 on my iPhone, though.

On Sunday I went on the annual bus Pilgrimage to Apple’s headquarters in Cupertino. As always, the only thing we were able to see was the Apple company store. I took advantage of it to pick up a USB Ethernet adapter for my MacBook Air, since large downloads aren’t allowed over wireless connections during WWDC. I was pleasantly surprised by how fast the MacBook Air USB adapter is and how it just works without any fuss, unlike USB ethernet adapters I’ve used in the past. 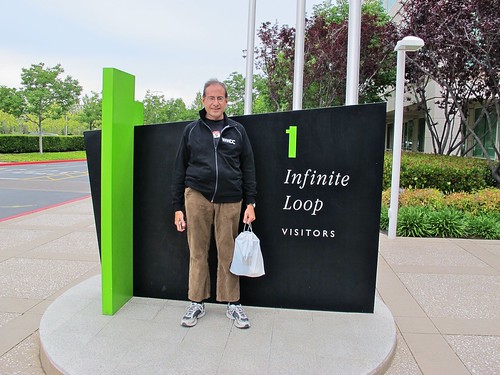 WWDC isn’t all work. There are also a few fun events, starting with Tuesday night’s Apple Design Awards and Stump The Experts. One highlight of the conference is always the Thursday night WWDC Bash. Since the Bash moved from Apple’s campus in previous years to Yerba Buena Garden across from Moscone Center, Apple has been getting major bands to perform at the Bash. In previous years they had Ozomotli, Barenaked Ladies, Cake, and OK Go. This year they got Michael Franti & Spearhead for a great show.

The conference ended at noon on Friday, so I took advantage of the rest of the day to enjoy San Francisco. I walked from Moscone to the Ferry Building & took lots of pictures, which you can see here. I only brought my Canon G12, since I didn’t feel like lugging the D90. I’m very happy with the results, both for still photos & videos.

After Sugar Rush Free was approved, I discovered it was using the wrong leaderboard name to submit scores to Game Center. I just submitted a quick update (version 1.0.3) which fixes it. Hopefully it won’t take too long to approve.

Sugar Rush Free has been approved and is now ready for sale. It displays an ad at the bottom of the screen and is limited to a height of 50,000. Of course, if you prefer not to see ads, you can still buy the full version of Sugar Rush.